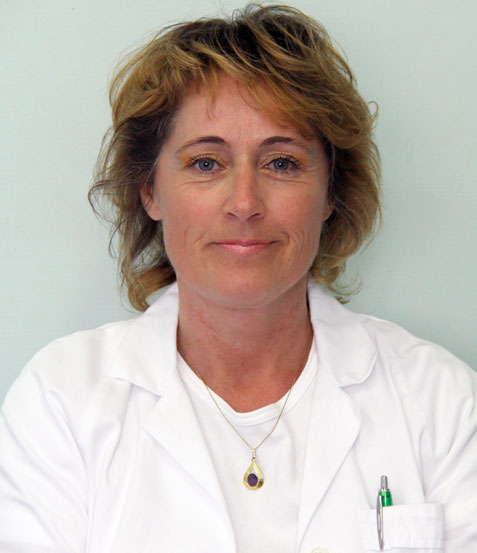 Tina Kotnik graduated in 1991 and began her work at the Clinic for Surgery and Small Animals of the Veterinary Faculty of Ljubljana in 1993. She became Master of Veterinary Science defending her thesis “The applicability of serological method ELISA in diagnostics of M.canis infection in cats” in 1996, and she became a Doctor of Veterinary Science defending her thesis: “Clinical study of treatment with terbinafine of experimentally infected cats with M.canis” in 1999.

Her professional specialities are mostly in the internal diseases of dogs and cats with great interest in dermatology. Every year she participates in professional meetings in Slovenia and abroad. In addition to clinical work, she teaches students participating the subjects of Diseases of Dogs and Cats, Propaedeutics, Surgery and the Ophthalmology and Dermatology of Dogs and Cats.

Her research work is done as the member of the research group P4-0053, with her main topic of interest being atopic dermatitis. Since 1996, she has been a member of the European Society of Veterinary Dermatology (ESVD). She was a member of the organising committee of the 23rd European Congress of ESVD, held in Bled, Slovenia, from 17 to 19 September 2009. She was the founding member and the first president of Dermatology Group as a part of Slovenian Association of Small Animal Practitioners (SZVMŽ), which was founded in Lipica, Slovenia, on 29 March 2008.